Recently I got a call about some woven seats where the nails kept falling out.  That sounded odd, but when I saw the chairs in person I knew immediately what was going on. 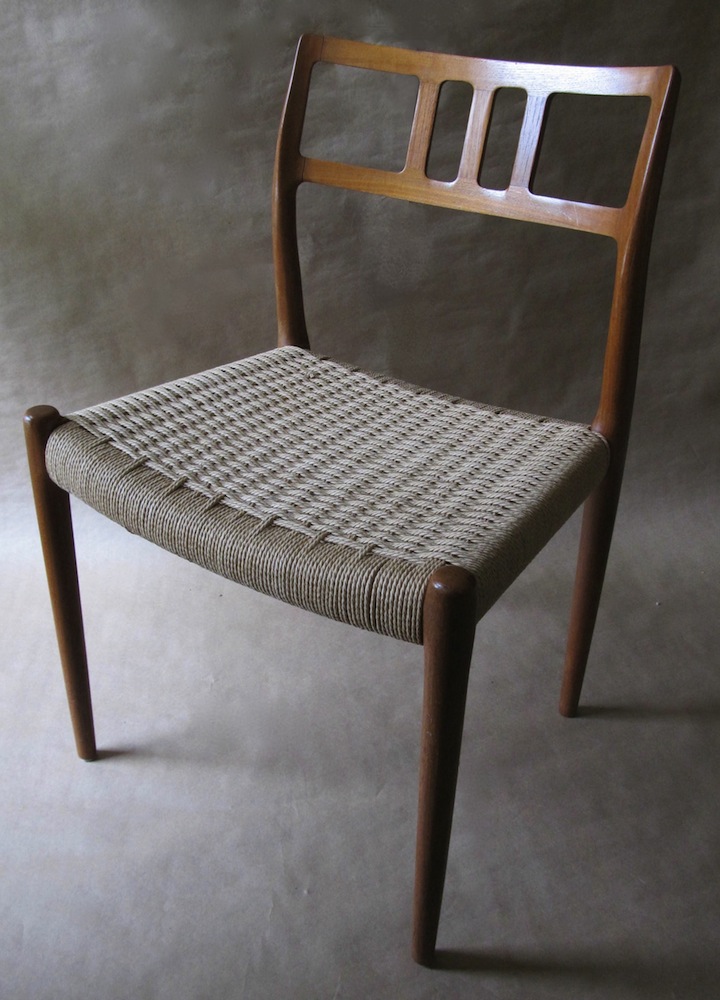 The chair seats looked pretty good—clean, no stains, no broken cords.  But… 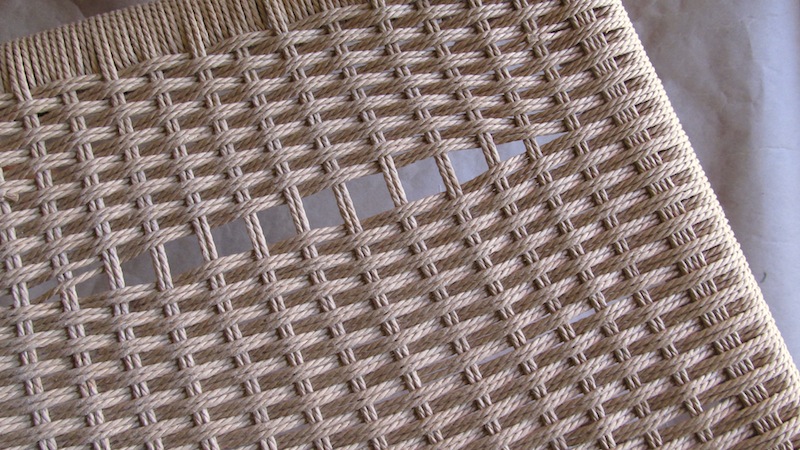 …the weave was so loose that I could easily push the cords apart to form this big gap.  They’d been recently rewoven by someone who hadn’t quite mastered the craft. 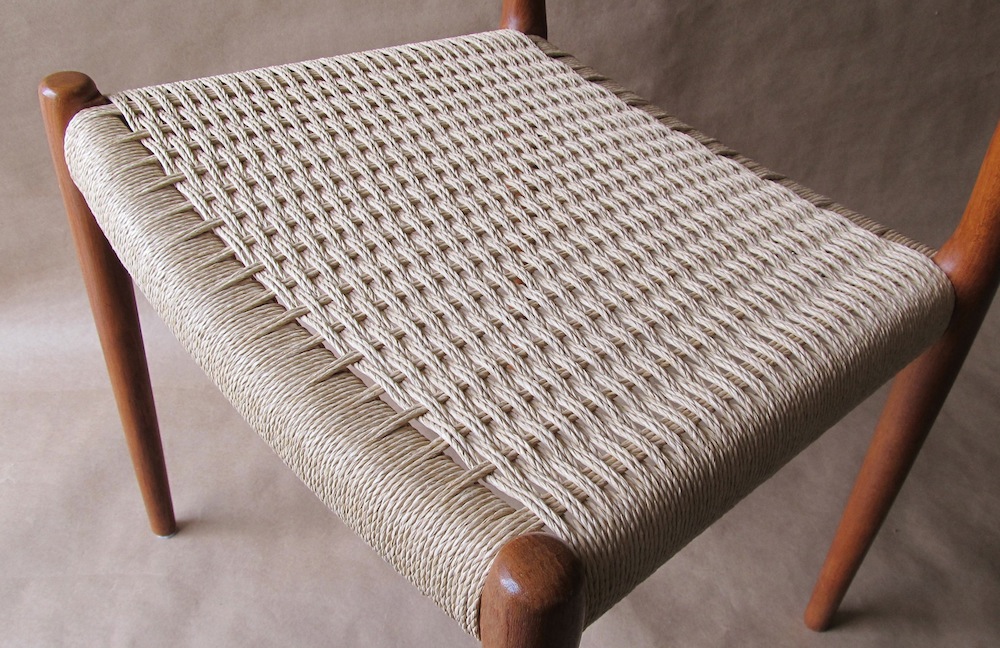 You can push the cords apart a little bit on the new seat but only enough to fit maybe a screwdriver blade through, not your big toe. 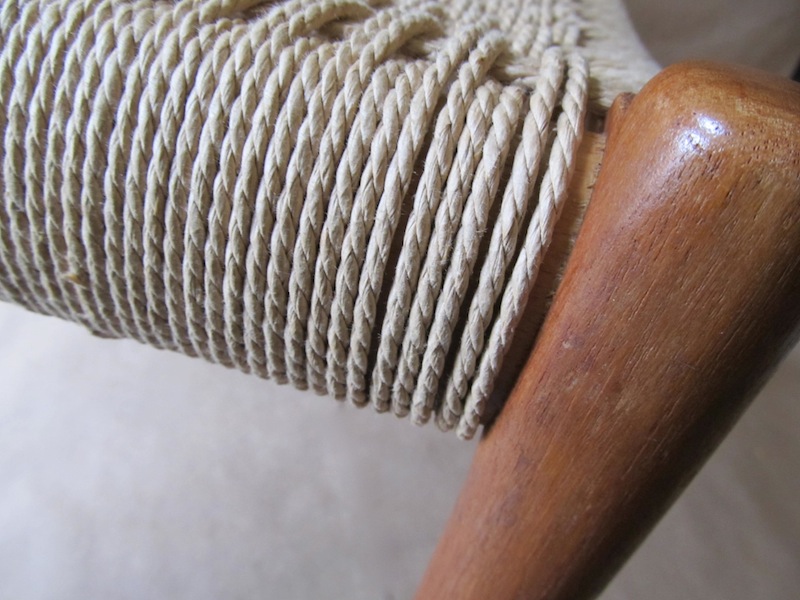 You might think such a thing wouldn’t matter that much as long as the seats look reasonably good and are clean and the cords aren’t broken. 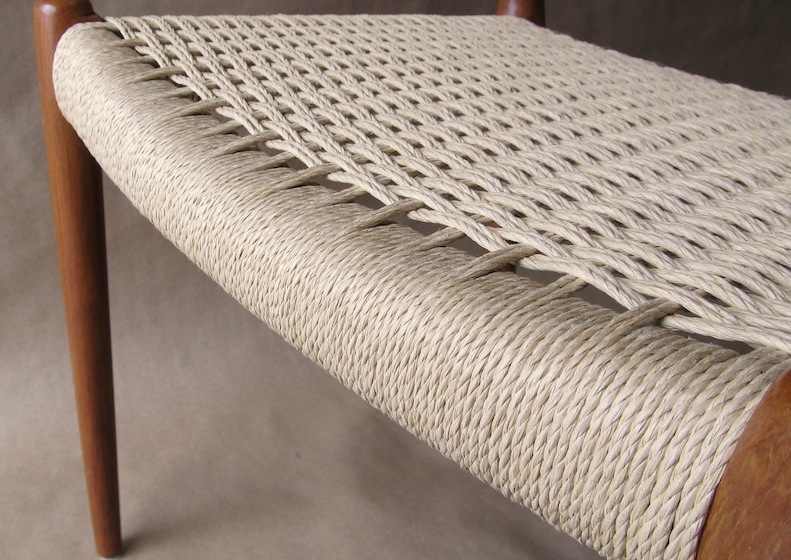 But actually, the tighter the weave, the less the cords can rub against each other and the wood, which is part of what wears them out.  The cords should be packed in as tightly as possible along all the rails, like this.  No gaps. 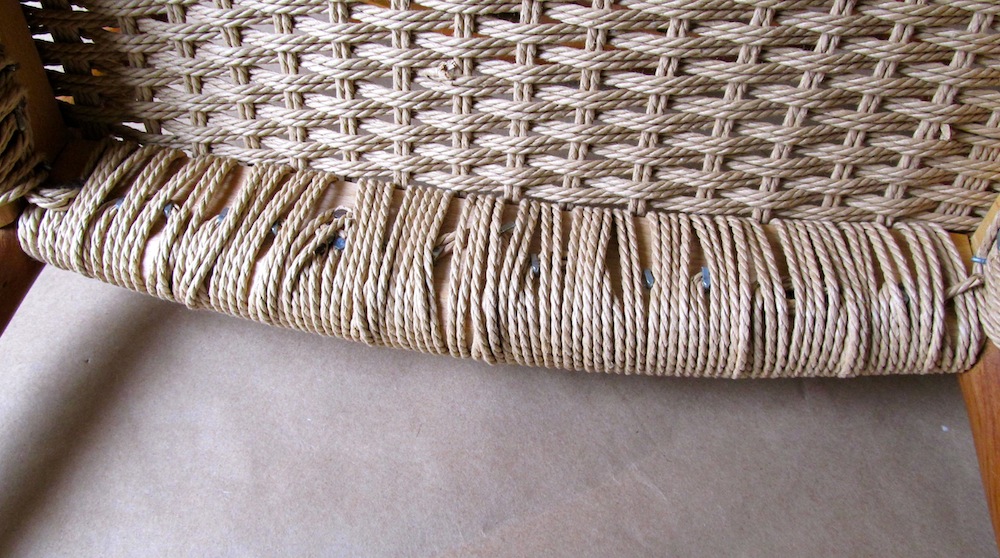 Check the underside.  See how some of the cords on this front rail overlap along the bottom edge?  And the rest are just kind of randomly wound around the rail? 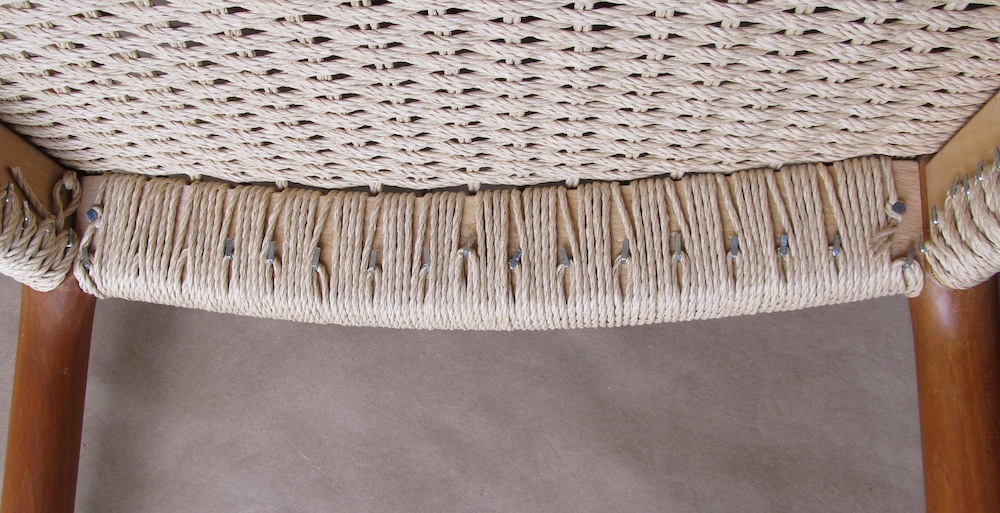 Same rail, done properly.  There should be no overlaps at all, ever, along the bottom edge. 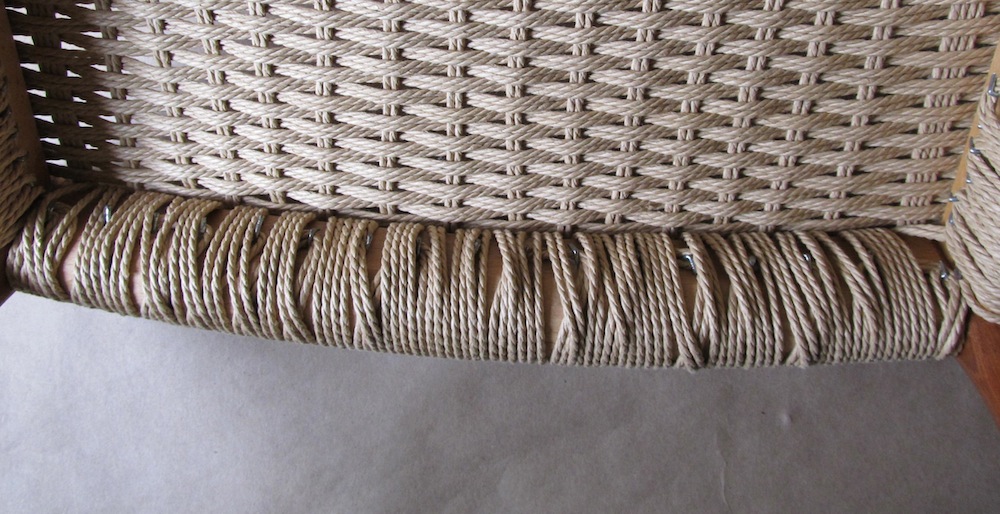 Same thing on the back rail.

Done properly, there are overlaps but they are very orderly and they sit well above the bottom edge of the rail. 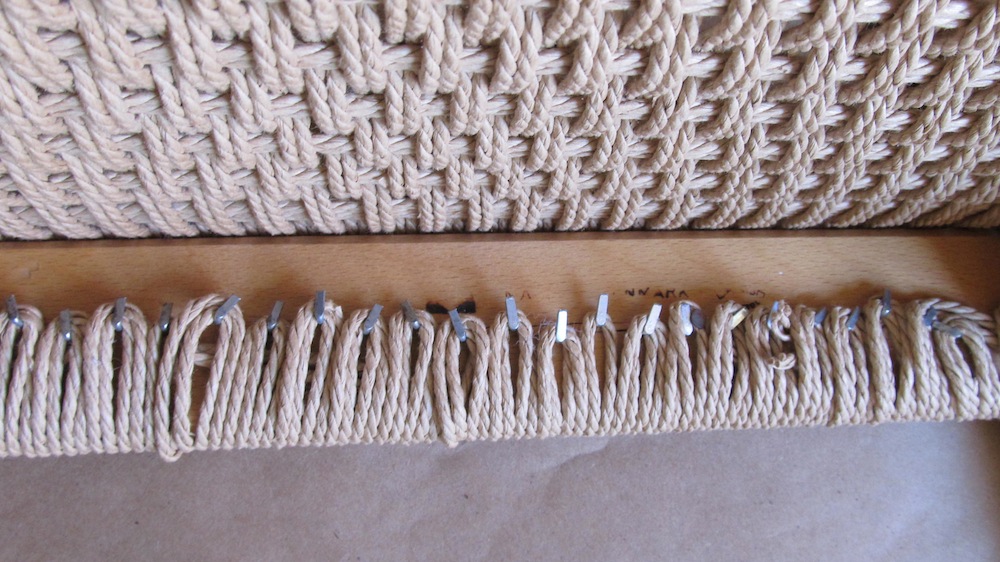 Now, back up to that problem of the nails falling out—this is due to the weave being too loose.  When someone got up from the chair, the cords had so much play in them that they were no longer pulling tight against the nails and the nails would just fall out.  The tension of the cords against the nails helps keep them in place.

You can see on the side rail above that some loops are loose and others are snug. 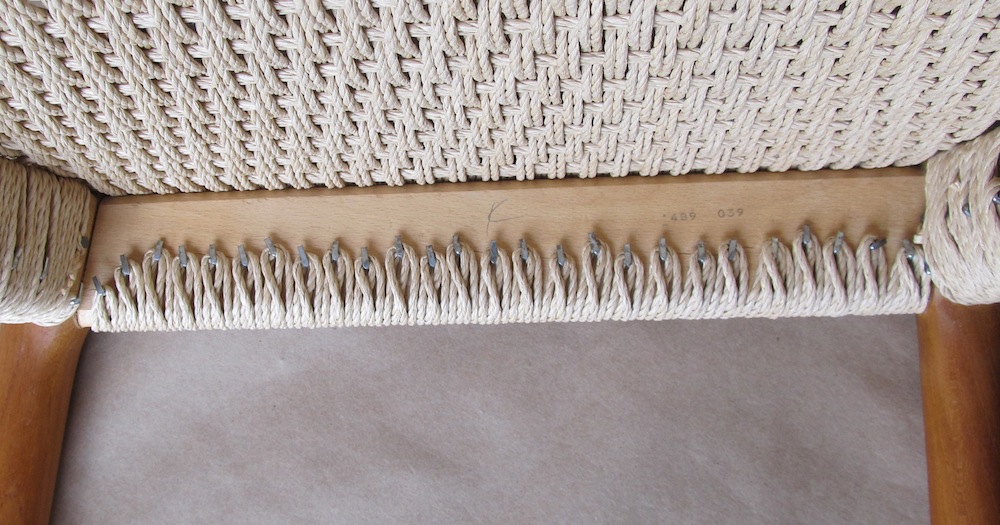 Same rail with uniform, tight tension on every nail. 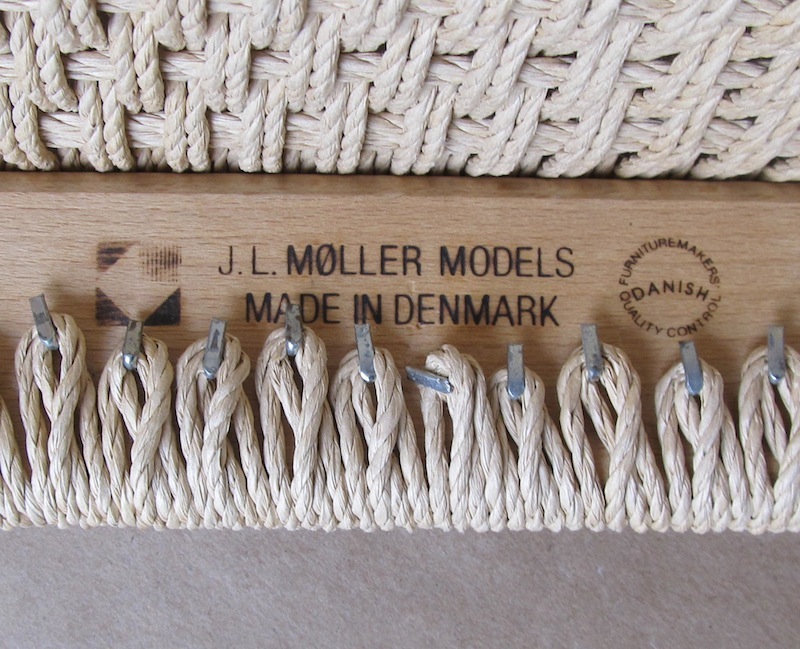 MCR strives for the same quality weaving found in the originals.